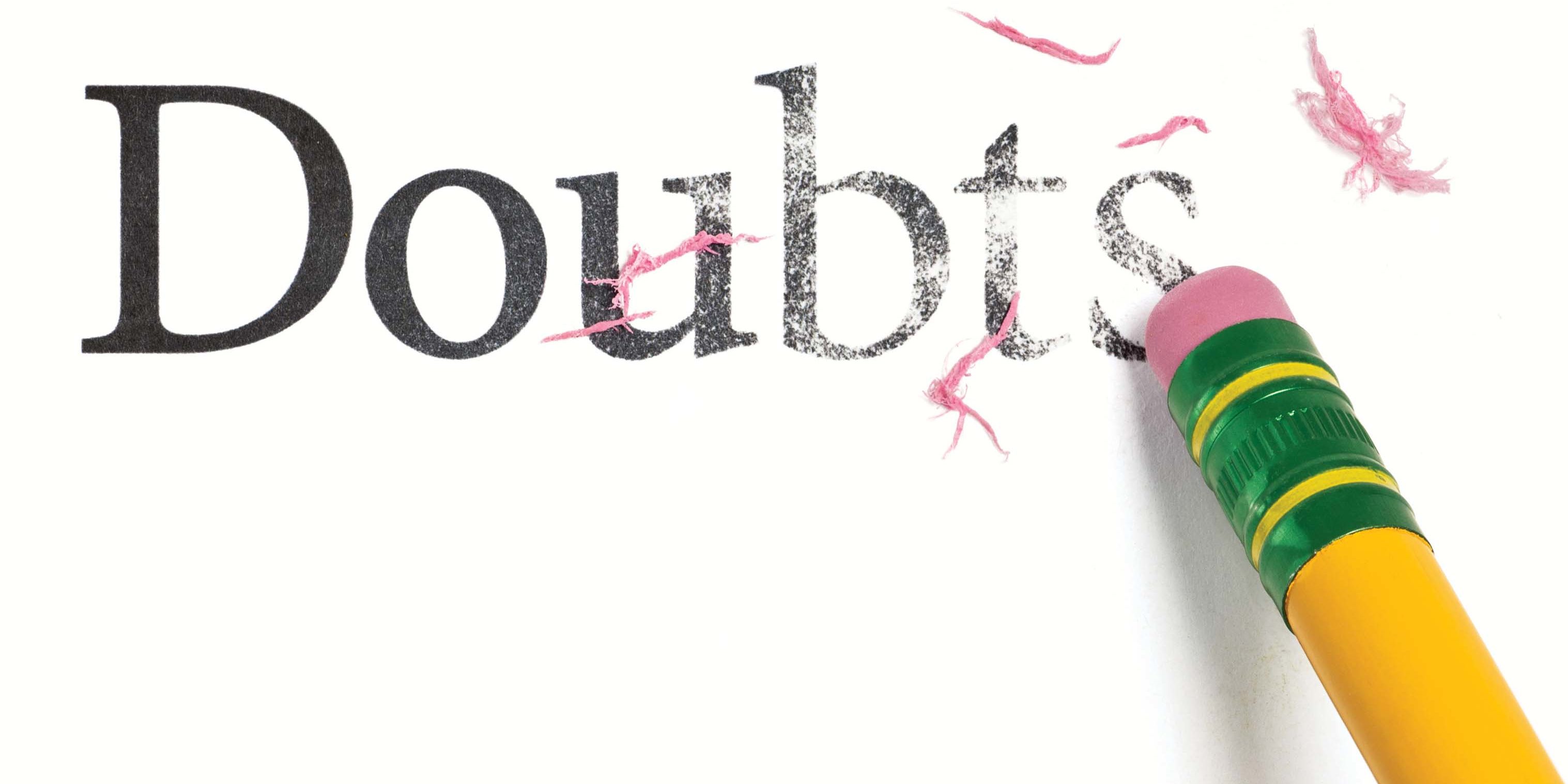 With a mood disorder like Bipolar One, my moods tend to be, well, disordered. Though I am fortunate not to be a rapid cycler–even without medications my manic episodes were years apart–each year when fall takes center stage and the days shorten, I sense melancholy in the cooling, darkening air and sorrow in the falling leaves. The downswings in spirit, though less horrific than mania, set upon me more regularly than the upswings.

Spiritually speaking, when my mood darkens I am more inclined to doubt. The calamities in the world seem more pronounced, people seem to lack humanness and God … well God is nowhere to be found. As I have matured in sobriety, however, I have found that it is imperative that I continue to nurture my spirit even in seasons of doubt.

Doubt, for me, is a natural part of life. In church testimony services I have heard people express that they “know” such and such to be true. Really? I am comfortable saying I “believe” certain thing to be true. I can act as if they are true. But until I leave this mortal existence and pass back through the veil that has obscured my remembrance of how things really are (or are not) I am hesitant to say I know anything.

The last time I assumed perfect knowledge of things divine I was about seven years old. The church I attended set aside one Sunday a month for the bearing of testimonies. Typically the children went first. Coached by their parents, these youngsters tended to bear similar testimonies: “I love my mom and dad. I love my Sunday school teacher. I know the church is true.” Etc., etc..

I decided one Sunday to join my peers on the stand. But as a true American original I wasn’t running with their boilerplate material. I decided to take to the podium and wow the congregation with faith- promoting material that was uniquely mine. I bore witness of the power of prayer, using to examples from my fledgling, but sincere prayer life–a little chicken soup for the praying soul if you will.

The first story I told … let’s come back to that one, it’s the only story people remember. The second story I told was of David, my childhood friend, getting tangled in some barbed wire as we explored a grassy field and creek near our home. It was a dire situation. The more he struggled the more entangled he got. Wire snips were not at the ready so I silently prayed. David wiggled out. Score one for the Eternal Being upstairs.

In hindsight, I should have opened with that story. Though it personally made quite the impact on my young prayer life, it went all but unnoticed by the listeners who were still trying to process my first faith promoting story.

Story number one was, I thought, a touching little anecdote about a boy and his dog … a dog named Pup. Pup was a beautiful, young female that, as I was horrified to discover on my way home from school, was joined in the nether regions to a wildly gyrating male dog from down the street. I was concerned for Pup, she appeared to be in distress. I yelled and I screamed, but to no avail. That little boy dog had an other-worldly glint in his eyes and seemed intent on maintaining his dominance over my little Pup. He paid me no heed.

So, as a gravely concerned little boy is wont to do, I ran indoors to find my mommy. “Mom, ” I exploded, “Pup is stuck to another dog and I can’t get them apart!” Well we hadn’t had “the talk” yet and apparently that day wasn’t to be the day. I don’t recall what my mother said, but it was a brush off that brought me no comfort.

Pup was under attack, mom had slinked off to the master bedroom to have a good laugh and I was scared. So I prayed. I prayed fervently. And, like the Red Sea, the two dogs parted–evidence, I told the audience, of the power of prayer. Perhaps not as dramatic as being freed from barbed wire, I thought, but still powerful proof.

Well my testimony made an impact all right. Just not what I intended. Following the services my sister asked mom and dad if we could move to another city (out of earshot of my young, naive ears) and people in the congregation started talking. Though nothing was said to me at the time, the retelling of that innocent little testimony behind my back spread far and wide over the years. It was told to me by a couple I just met when I was in Chicago twelve years later. It was told to my brother by new acquaintances at a college bowl game a decade and a half later. And it was submitted in writing to my sister-in-law when she was charged with the maintenance of a college folklore archive thirty years after the fact. We all vouched for its authenticity.

For my part, I carried on in ignorant bliss for several years until I got clued into the birds and the bees. I remember thinking at the time, “I wonder if anyone remembered that little testimony of mine?” Of course they did. Once it was out on the table, it’s been retold at every family gathering for the last four decades.

Frisky little dogs aside, I tell the story to underscore why I am reluctant to say “I know” when what I should be saying is “I believe.” God had little to do with two dogs coming apart. Nature ran its course, they enjoyed a little post-coitus doggy cigarette and that was that.

Belief allows room for doubt. Stating “I believe” rather than “I know” avoids the crisis of faith when doubts creep in. “Lord I believe, help Thou my unbelief.” It is in embracing my doubts and walking through them that my faith is strengthened. It is during times of doubt that I must all the more diligently make a practice of nurturing my spiritual life.

Because I doubt must I be cynical and jaded? I think not. I mediate, I pray, I look to serve others. I express gratitude until it moves me to act. For gratitude is an action word.

Yet, despite all my efforts, there are definitely times that I doubt. I believe that it is natural to doubt. It is reasonable to doubt. And, given how many organized religions carry on, I don’t doubt but that God views doubters with some favor.

Still, I have experienced enough of life to believe that love, inner guidance and an instinctual belief in an eternal soul suggests a realm of higher meaning beyond what little is known of biological evolution and what is speculated as accident. Just as a newly hatched chick instinctually knows to flee the presence of a hawk or even cardboard cutout of a hawk, yet stays calm in the presence of a dove, in my quietest state I instinctually turn from that which is base, degenerate and self-centered and find peace reflecting on a source of loving power, an eternal connection to that power and a purposeful universe.

As a believer, I feel a sense of awe and mystery when I look inward and beyond. In doubt, I value the ability to understand the world only in terms of sensory experiences and rational proofs. I’ve lived in both worlds and don’t understand why there is often anger and vitriol between the two. Better to be on one or the other camps than being disinterested and floundering.

I tilt towards belief because when I put my beliefs into action I find bliss and serenity. But I understand and acknowledge the doubter. I embrace the doubter within me as a gadfly that prompts me feed my spirit and clarify my beliefs. Whether in doubt or belief I am trying to figure out whether the universe has a purpose and to tap into my humanness and higher self. For too long I was a mindless drunk adrift between the two camps. Now is the time to discover the universe’s agenda for my life and to get into action.

In times past, when my gray matter started spinning, I tended to view life as a problem to be solved. I still take that approach with much of what I encounter. For example, I love magic shows. I am duped every time. But afterwards I spend hours trying to figure out a solution to each trick. I used to spend countless hours trying to figure out life in a similar manner. Then I came across the French philosopher Gabriel Marcel. He wrote about the difference between problems and mysteries. Problems, he stated, must be solved but mysteries are to be enjoyed. I have found that I have a richer, more satisfying life experience when I view the universal forces and existence itself as a mystery to be enjoyed rather than a problem to be solved.