God and the Tandem Bike

You are here:
Slices of Life 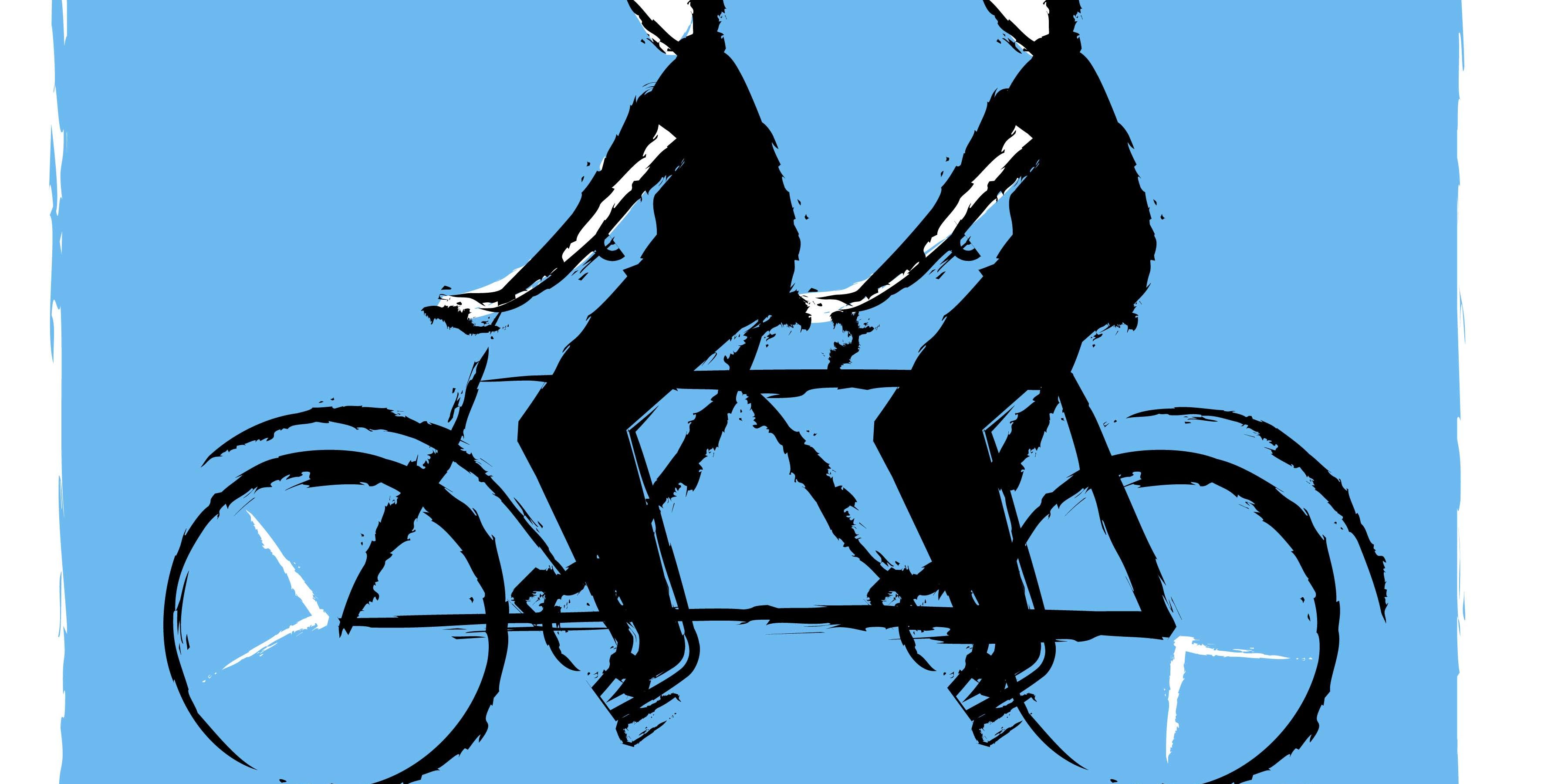 As a child I was introduced to the angry, judgmental God of the Old Testament. He sent floods, rained down fire and brimstone and sent armies to destroy people whose only fault, it seemed, was living in a land predestined for “chosen” people.

In trying to get sober I was a little concerned when advised to seek out God. My lifestyle up to the point of getting sober was not the type that would endear me to a punishing God. I was more of a candidate to be turned into a pillar of salt than to be spared the cruel lash of addiction.

But then it was suggested that I cast off childish notions and find my own concept of God. One suggestion was seeing myself on a tandem bicycle, the other seat occupied by a Higher Power whom I could choose to call God.

A Higher Power. An extra boost. That concept helped.

As I navigated the highways and byways of early sobriety I saw myself getting a little extra help from the entity pedaling in the back. I needed strength that I, alone, did not possess. So I asked for help.

For a good long time I kept that Higher Power seated squarely behind me. Self-will still coursed through my veins. I was none to inclined to relinquish control of the handle bars.

Although Step Three, of Twelve Step recovery, suggests turning my life and my will over to the care of God, I was slow on the uptake. I paid lip service to the step but clutched the handle bar of my tandem bike fiercely.

Further into the journey of sobriety it was suggested that I put on the big boy sobriety pants and trade seats with that which I call divine. It didn’t come naturally, but life has not been the same since.

When I was in control of the steering the bike I thought I knew the way. Each day it was the same route. Leaving home I’d head to the convenience store, grab a Diet Coke and then to work. I went through the motions at work, then back to the convenience store for a lottery ticket before heading back home. Then, on most nights, off to a Twelve Step meeting.

It was a safe, predictable life, but not much growth. I was pedaling and steering but I seemed to be getting nowhere. I began to reflect on whether I was living the steps or just treating them like a one-and-done quick pass on my way to a self-directed life.

Knowing that I was falling short of the ideal I returned to the Third Step prayer learned in early sobriety and strove to embrace its full meaning: “God, I offer myself to Thee-to build with me and to do with me as Thou wilt. Relieve me of the bondage of self [my self-centered fear], that I may better do Thy will. Take away my difficulties [in a manner of Thy choosing] that victory over them may bear witness to those I would help of Thy Power, Thy Love and Thy Way of life. May I do Thy will always!”

Repeating these words slowly and with all the faith I could muster, I resolved to let that which I call Divine take the front seat. Then I paused to listen. The voice in the front seat simply said “Pedal.”

So I pedaled. I resisted the urge to retake the front seat and simply did my part. I stayed in action and pedaled. I made a regular practice of getting quiet and seeking out guidance.

At times I am prompted to help someone in need or share a particular thought. But the most consistent prompting I get is to stay aware and do the next right thing. I need to be reminded of that often.

For example, I recently spent several days in the water on the beaches of Oahu. Taking advantage of some down time I reflected heavily on that pesky Third Step prayer. I was contemplating the fact that I had offered myself to God to build with me and do with me as God wilt. I realized that offering to have God mold me into what God wanted me to be meant that I may not have all the pleasure and comfort that my selfish nature desires. If God was going to build me into something better God may see fit to have me go through some challenges and expend some effort. It became clear that God is far more interested in the building of my character than in promoting my comfort.

As I treaded water and tried to get quiet I repeatedly asked, “What would you have me do?” I wanted something grand. The answer that kept coming back was simple and clear: “Do the next right thing.”

I opened my eyes and took in my surroundings. The particular beach that I was at had a sea wall that kept waves from breaking on the beach. As a result, loose trash and leaves were floating in the water and never getting to shore.

The next right thing? That day it meant that I would collect every piece of trash that I saw. For an hour I bobbed in the water, snatching debris and stuffing it in my pockets. My egoic mind sees me saving the world as I follow God’s dictates. More often than not, however, the next right thing is far less heroic.

Giving up the driver’s seat, for me, is not a onetime decision. Many a morning, after the ego fairy has sprinkled a heaping dose of ego dust on me as I slept, I arise and take my place on the front seat. All too often I want to be in control.

Fortunately I’ve made a habit of repeating and reflecting on that Third Step prayer with some regularity. When I do, I am reminded to relinquish that front seat, move to the back, and just pedal.

There have been times, like when my wife went through her lung transplant, when that tandem bicycle races forward without me in control. If I’m not careful I can slip into fear and worry since I can’t see the way. Many times the route taken is not the route I would have chosen.

If I were in control I would likely veer off onto any road that went downhill and simply coast. With God in control the exact opposite is true. There is many a time when I am pedaling hard to get up a particular hill. But there is always rest when needed. And once those hills have been conquered the view is amazing.

I get stressed. I get lazy. I get fearful. There are times I want to give up. In times like these I need to get quiet and listen. The still small voice from the Divine force in the front seat is always the same: “Trust me … pedal.”