This past weekend I sought out just that. Aiding this effort was a repurposed Mt. Olive pickle jar. A jar filled with murky, muddy water. I suppose an explanation is in order.

My ex suggested I check out Pinterest for writer’s inspiration. Pinterest? I’ve got the NFL app and Yahoo Sports on my phone; am I the target demographic for a site catering to the recipe and crafts sharing crowd?

Come to find out, I mocked that which I did not understand. I visited. I perused. I pinned.

Inspired by pictures of “mind jars,” I embarked on a little experiment.

Initially the plan was to scoop water from the irrigation canal that borders our housing development. Wouldn‘t rapidly swirly waters from a murky canal mirror my rapidly swirling, murky mind?

But then I thought that through. To retrieve the water I’d need to place the jar in my pool cleaning net to reach the canal below a steep dirt embankment. I pictured myself walking home from with a pickle jar filled with dank water in one hand and a pool net at the end of a pole in the other. My neighbors knew all too well of my manic break leading to a brief incarceration in 2010. Parading down the street with jar and pole in tow might prove to be a 911–call–inducing spectacle I didn’t need to deal with.

I reconsidered and opted to fill the jar with some tap water and a scoop of dirt from the backyard. Once the jar was assembled I gave it a good whirl, set it on the grand piano in our great room and waited ...

Unlike the mind jars on Pinterest which are filled with colored water and glitter that settles within minutes, the muck did clear up right away. The slowly swirling water stayed murky. I opted to give my mind jar time to calm down and seek clarity.

Stepping into my Nikes I headed out for a four mile walk along the same canal from whence the water was initially going to originate. Instead of donning an iPod as is typically, I went distraction free- focusing solely on my breath and the sound of shoes on a gravel path.

As I walked, I pictured the sediment in my jar gradually settling to the bottom. I pictured the fears, cares, and distractions settling from my mind down into my digestive track to be expelled. (Insert inappropriate poop jokes here.)

For an hour and twenty minutes I stayed focused on the jar and my mind remaining motionless. I imagined whirling water quieting. I imagined silt settling to the bottom. I imagined the water, and my mind, clear and peaceful.

Returning home mentally rested and reinvigorated, I ventured into the great room to see what had transpired. The silt had indeed settled. Once opaque, the jar now streamed light from the floor-to- ceiling windows. But unlike the mental image I had created during my walking meditation, perfect clarity had not been achieved; the water was still a bit cloudy. I was to learn later that my mind was a bit cloudy as well.

After dinner I headed off with my wife and one of her sponsees to a Twelve Step meeting. I was peaceful. I was serene … until I wasn’t.

All it took to disrupt a Sabbath filled with meditation, peace and serenity was to see the face of someone from my past. Someone I apparently still had resentment towards.

Not ten minutes into the meeting I lost focus on what was being discussed and instead played out a little scenario in which said individual shared something disruptive and thus prompted me to shout that individual down in front of the whole group. My heart actually raced as I acted out this little script in my head. Hmmm, no wonder the water was still cloudy.

My Sabbath may have come to a close, but my need for rest and rejuvenation had not. It was time to dig a little deeper.

Before heading to work the next morning I gave that jar another shake. Getting into my truck for the forty minute commute into work I gave sports talk radio the morning off. I pictured the water getting still and the sediment settling. I let my mind go quiet. I said a prayer for someone I had once called friend … someone who, like me, has imperfections.

As peace settled over me I realized that the Sabbath is not a day, it‘s an attitude. If I want peace and serenity I have to carry that attitude with me, as The Beatles say, eight days a week. 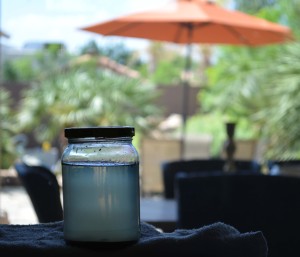