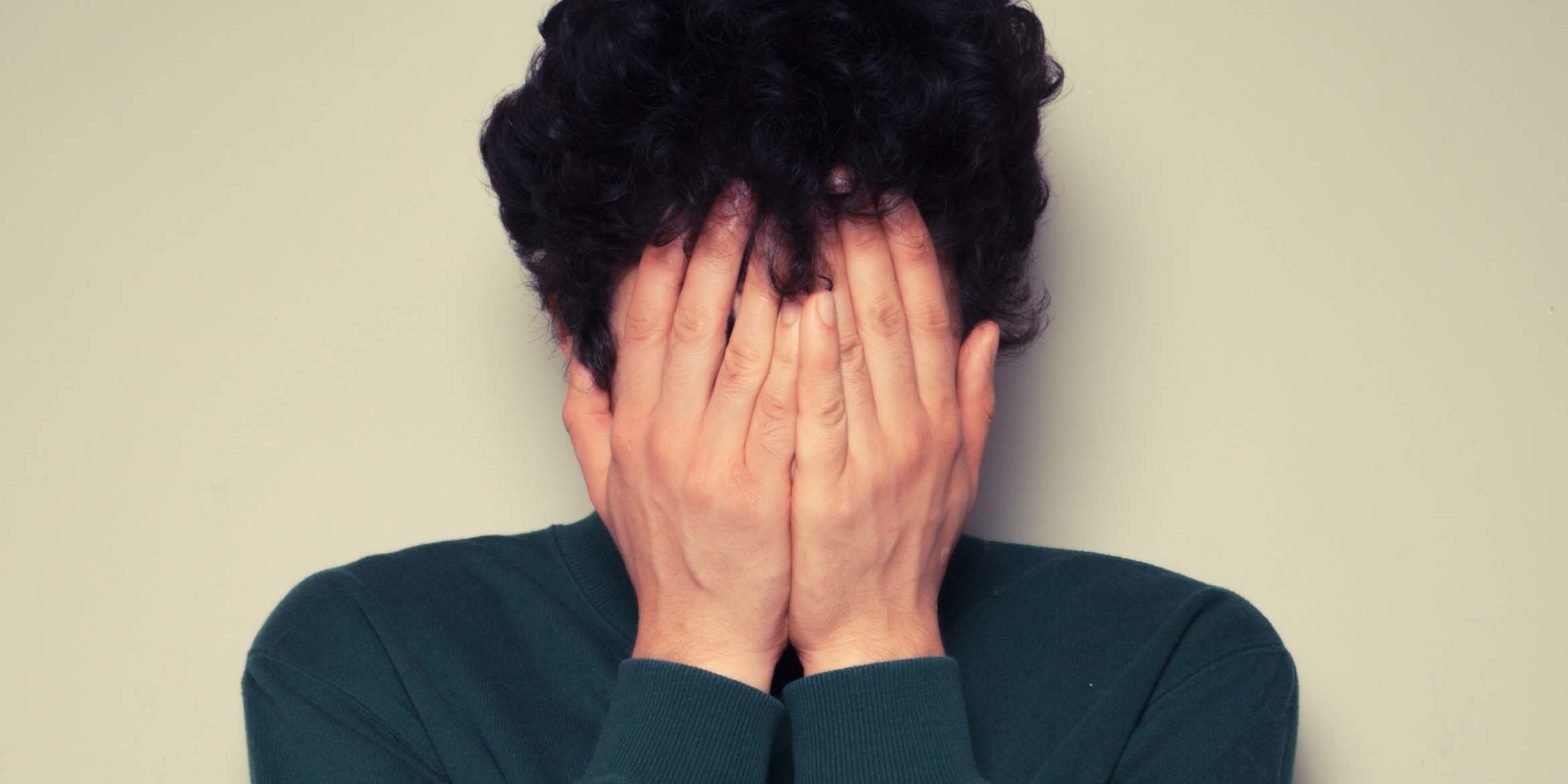 If only shame were fleeting and impermanent. But it’s not. It’s sticky. Hard to remove. Crippling.

Unlike justified guilt, which just tells me I did something wrong, shame says I am wrong-–defective to the core. Avoid me. Shun me. Whisk the children away at my coming.

Guilt, if heeded, can be productive. I change my ways. I make amends. I correct course.

Shame, on the other hand, has me hanging my head, retreating to the corner, disconnecting from those around me.

I felt it, in my gut, for the first time when I was six. I had an Asian friend and for some reason I noted that his arms were smooth-baby-bottom smooth. Peach fuzz covered my adolescent arms—a precursor to the day when hair would sprout everywhere but my temples and back of the head. His arms looked better to me.

Father’s razor in hand, I dry-shaved every last hair from my arms. Perfection achieved. I returned the razor to the medicine cabinet un-rinsed and clogged.

The next morning while prepping for the day ahead, my dad immediately detected the inefficacy of his blade. He summoned me to the bathroom. Panicked, I froze. I offered no explanation. My scrawny little arms, nicks and all, spoke volumes. I learned for the first time what it meant to be grounded.

Just the act of challenging me caused me to think I was defective in some way. I expected to play an error-free game of life. I expected perfection.

Surprisingly, I felt no guilt for rendering the razor blade dull. Already I was too self-centered to consider the impact of my actions on others. But in having my secret exposed I knew, I just knew, that I was broken.

Long before my classmates branded me as odd ... if they ever did … I knew that my wiring wasn‘t properly grounded. I had planned on showing my shaved arms to my Asian friend as a symbol of solidarity. Instead I hid them with long flannel sleeves.

Reacting with shame would become the norm. I never felt quite right. Hence I was drawn to the comfort of intoxicating substances and the patently false l-don‘t–care stance of the early punk rock era.

Years later-when, in sobriety, I went manic, went to jail and went bankrupt in a very public fashion–I discovered a level of shame unmatched by anything in my past. Though I eventually regained my freedom, sanity, and career, I had a deep–seated feeling that I was irreversibly defective.

Even at Twelve Step meetings, the gathering place of fractured souls, I felt out of sorts. Oh to be a gutter drunk. What I‘d give to have skid row as my bottom instead of a very public bout of the crazies.

(But is that true? My bottom had a roof over my head, a pool in the backyard and cars in the driveway. Was it that bad? Or do I always exaggerate my issues and minimize the problems of others?)

Regardless, I was hurting and my sponsor provided no solace. He had seen cell phone videos I had shot when I was unhinged in which I played out the role of a man bent on homicide. My crazed attempts as dark humor struck him as bizarre and dangerous. We didn‘t speak much of the whole episode.

So I went through my days always a half-step towards slinking into the shadows. I participated half heartedly in my recovery. I floundered. I was without peers–in the sense of being less than, not superior too.

Shame was my near constant companion. Even when I emerged from the inevitable depression that followed my last bout of mania, shame-based thinking plagued me.

Each time I walked through the airport in Phoenix, just a few miles away from where I was fired at the height of my manic episode, the irrational fear of running into one of my former clients haunted me. Alone with my thoughts, the slightest flicker of a memory from that twisted chapter of my life caused me to visibly wince. There seemed to be no escape.

Mercifully, the God I have back-burnered all too often heard the unexpressed yearnings of my tortured soul. A small, but liberating miracle was in the making.

Two years after my manic episode, my work as a consultant took me to the little college town of Corvallis–fifty-five thousand people in central western Oregon. The city makes up the majority of the population of Benton County which a 2003 study found to be the least religious county per capita in the United States.

Given the dysfunction of many organized religious bodies, I‘ve long suspected that God might favor the unaffiliated and agnostic. The grace of God was most certainly upon Corvallis in the spring of 2012.

I travelled on Mondays. Four a.m. was the typical start time. Thirteen hundred miles by air. Another ninety by car. And then a full day of work. Come Monday evening I was more inclined to head straight to the hotel than a Twelve Step meeting. But one dark grey Monday a meeting sounded like just the ticket.

I prefer my meetings after dinner–seven or eight p.m. was my norm. But on this particular Monday I found myself at a five-thirty meeting in a frigid library annex of the local Catholic Church.

As it turned out Bob wasn’t much for meetings at this time either. That day he shared that he as typically a noon meeting kind of a guy. He was supposed to have been fishing in one of the many streams or rivers surrounding Corvallis. He came to the meeting in waders to underscore what he rather would have been doing.

He explained that there was a time in sobriety that he didn’t see a reason to stay on his meds. Now he had my full attention. Continuing, he related how he had slipped into mania and had been arrested while in sobriety. My kind of guy.

Needless to say, when the meeting was over I nearly pushed people aside to get to Bob as quickly as possible. “I thought I was out for a joy ride in my truck,” he reminisced. “They called it assault with a deadly weapon.” I could relate. I was just packing my bags and happened to be
holding a pistol when my wife poked her head in the bedroom door. They called that assault as
well and sent in the SWAT team to underscore their concern.

We exchanged phone numbers. We met up for dinner. We swapped stories. We jointly vowed to stay on our meds. Almost immediately, two years worth of crippling shame was lifted. I wasn’t completely whole, but I felt a part of Twelve Step recovery again.

Later I would see a counselor. Shards of shame-based thinking related to my firing and the impact on my wife and daughters necessitated a handful of ninety minute sessions. I made amends to my old employer. I discussed the episode openly and candidly with my daughters. I made my peace with one of the darker segments of my life.

After navigating the minefield of shame uneducated, I came across the work of Brene Brown, Ph.D. a research professor, author and public speaker based out of the University of Houston’s Graduate College of Social Work. Brene, who has researched shame in depth, has written extensively on research that provides insights into how people develop shame resilience.

In hindsight, my little miracle of interaction with Bob closely parallels a key point of Dr. Brown’s findings. She encourages those who are struggling with shame to tell their story, stating that “shame cannot survive being spoken,”

She continues by noting that the perfect antidote for shame-based thinking it to share that story with someone who is truly empathetic. Bob was such a person for me. He could and did say he knew exactly what I was going through.

Bob never tried to one-up me or minimize what I had been through. He just listened and related experiences of his own. What a blessing. Brene encourages people to share their story with a similar trusted friend or advisor–someone who has earned the right to hear your story.

Speaking shame goes hand-in-hand with the Twelve Step adage of “Our secrets keep us sick.” I took the worst possible course of action initially–keeping that shame bottled up inside where it repeated and replayed, slowly corroding my sense of self-esteem.

On some level I understood the concept of outing my shame-filled thoughts in order build up resilience to them long before being crippled emotionally by my newspaper-headline-achieving bout of mania. Hadn’t I shared many of my secrets with my sponsor in early sobriety? Didn’t having those stories met with empathy free me from a lifetime of torturous, continually replaying memories?

But one of the first things I heard when returning to meetings in 2006 was that we have a built in forgetter. This is often mentioned to remind people why continued participation in meetings is so vital. I guess I forgot that I have a forgetter. I forgot to out my shame and I suffered.

Fortunately, in this classroom I call life, courses aren‘t one and done. I can find myself in the same class repeatedly. Perhaps it‘s graduate work, but I suspect I am in the remedial class more often than not. And that’s just ok.