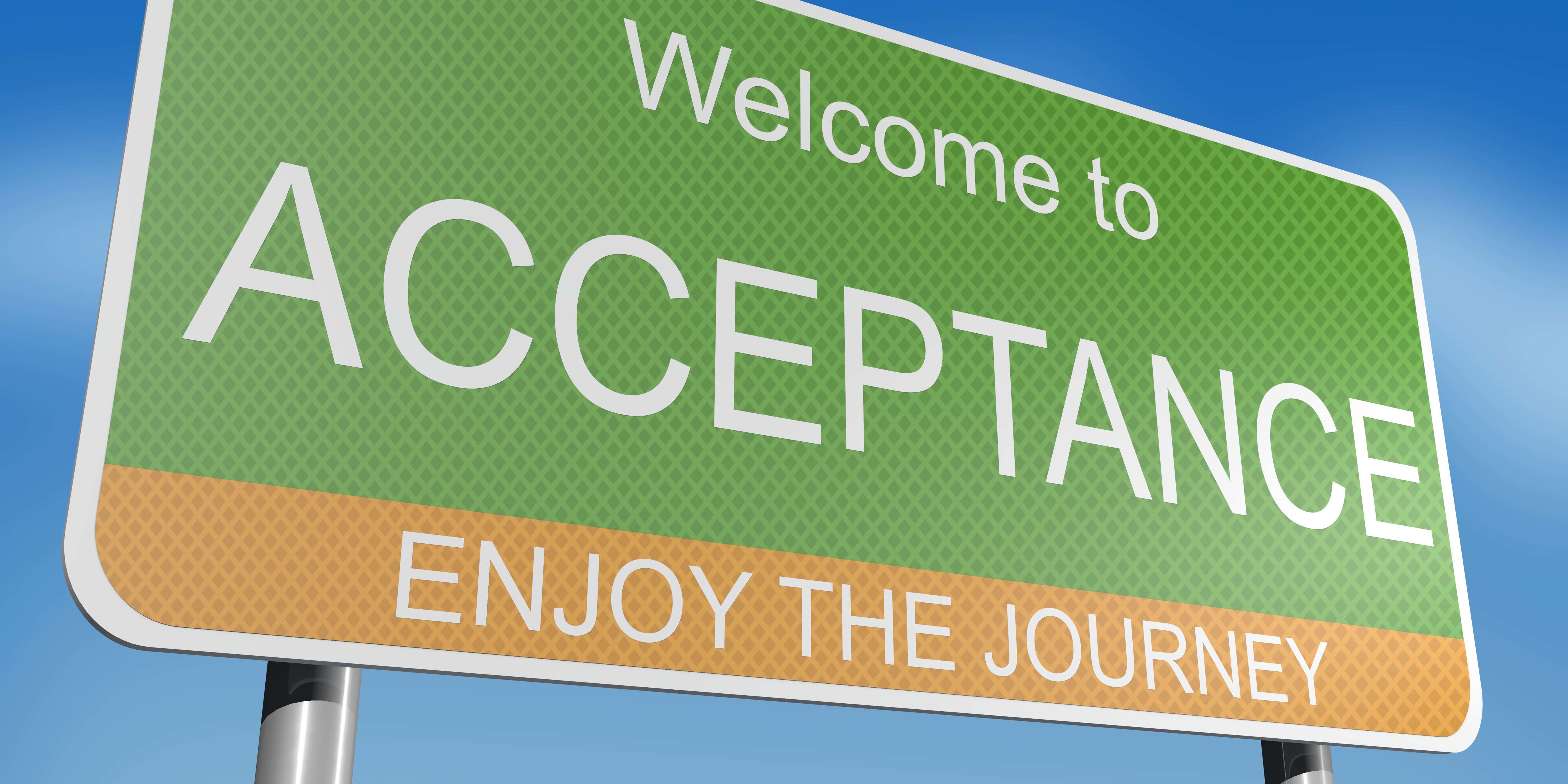 Nothing clarifies my thinking, brings peace of mind or put me in a position to effect positive change like acceptance–acceptance of everything as it is right now; no vain attempts to rewrite the past or worrying about a future that may not materialize. But there is a catch. While acceptance implies that I am fully conscious and aware of how things really are, I need not placidly yield if I perceive detrimental conditions that can be corrected or injustices that can be set right. Acceptance does not mean that I am a doormat.

It’s been said that you can’t change the wind, but you can adjust the sails. I learned this first hand during a summer spent navigating a small sailboat in and around the harbor and coastline at Newport Beach, CA. When the wind whipped up or changed direction the worst thing I could do was to panic. Panic causes tunnel vision and, as I learned on occasion, that can lead to capsizing. But if I calmly accepted the dangerous conditions I could see more clearly how to adjust the sails, correct course and sail smoothly.

Despite how grandiose I became when drunk or manic, I never got to the point where I could change the elements. The wind blows wherever it wants, with or without me. I have to accept that. But once I have accepted things as they are, I can see my way to taking the actions needed to set my course.

Life in general is that way. Acceptance is the starting point. Until I accepted I was alcoholic I could seek no recovery. Until I accepted that my internal wiring predisposes me to bouts of mania and depression I could not seek medical assistance or make needed lifestyle changes. Until I accepted the many mistakes I have made, I could make no amends. The curious paradox is that it is only when I accept myself as I really am that I can see clearly enough to make a change.

It takes courage to change what I have accepted and for this I seek empowerment from a Higher Power. Many alcoholics and addicts like their prayers, and one of the things prayed for is the courage to change the things I can. It’s tempting to be the doormat. It’s tempting to play the victim card. But if sought, I’ve found a source of Universal Power that instills me with the internal fortitude needed to effect change.

Acceptance extends to how I view others. In Twelve Step service, I am often in the position of interacting with someone who has just hit rock bottom. They rarely, if ever, are in a position to show their best side. Character defects are in an amplified state and resentments are often raging. It is at this point that I must demonstrate unconditional acceptance of that person. It is the most loving thing I can do. It doesn’t come easily.

Suspending judgment so I can be of assistance requires real effort on my part. It’s said that many alcoholics are perfectionists. More accurately, I expect perfectionism in others—hardly a desirable mindset when working with others. So I pray for patience, compassion and, most importantly, acceptance.

In accepting others it helps to be mindful of the many ways I have fallen short of the mark in this life. By acknowledging my many foibles I can better extend tolerance, understanding and forgiveness to my fellows.

As I bumble and fumble through life, accepting what has happened is the first step in overcoming the consequences of my failed actions. I saw this first hand after my last major bout with mania. Damage had been done, Relationships stood in need of repair. As I slumped into the downswing of depression that invariably follows mania I wasted months trying to recreate the past in my head. The few times I came close to acknowledging what had happened I had delusional dreams of winning the lottery so I could smooth over damaged relationships with money—hardly a healthy state of mind.

To pull out of the depression I had to first accept what had happened so I could more maturely deal with the consequences. It didn’t happen overnight, but it was critical to putting myself in the position to make amends and start piecing my life back together.

In Twelve Step recovery, where acceptance is discussed with great frequency, some make the mistake of confusing it with being in a passive state. Being conscious of a given situation does not necessitate that we roll over and do nothing about it. When I am truly in acceptance there comes a subtly energy that quickens my spirit and guides me to taking those actions needed to make the best of situation.

Acceptance doesn’t mean resignation; it doesn’t mean condoning. Acceptance means seeing things as they are at that moment and then looking for a way through it. Can the situation be changed? Do I need the patience to endure? Is there a lesson to be learned?

What if Martin Luther King or Mahatma Gandhi passively rolled over in light of the injustices they encountered? Instead, they acknowledge the situation but then tapped into the courage and fortitude needed to move beyond their present state.

Acceptance is not conditional. I don’t have to demand that there be mutual acceptance before there is any acceptance on my part. In Twelve-Step recovery there is an emphasis on keeping your own side of the street clean. In other words, do what you can about improving your own situation without making it conditional on what other parties do.

Acceptance has to come from within. For me it is often more instinctual than intellectual. The rapidly churning hamster wheel in my brain is often the last part of me that accepts anything. I saw this first hand when I was taking a long walk to contemplate why there are so many tragedies and calamities in the world.

I walked for miles, all the way praying to understand Universal Design. I got my answer. I knew, at one level, like a parent knows that children will learn from their struggles, that the design was perfect in terms of my eternal progression. But it was far more a relaxing into acceptance of the way things are then an intellectual awakening that I could layout in a written treatise.

There is a prayer frequently recited in recovery that asks for the serenity to accept the things I cannot change, the courage to change the things I can and the wisdom to know the difference.

Knowing the difference does not come easily to someone like me. As a recovering alcoholic, I attend meetings on a regular basis. In Arizona, where I finally put the bottle down, meetings typically last one hour. For the first six months of my sobriety, my cute little bottom got accustomed to sitting still for sixty minutes.

But then at six months sober I moved to California to pursue a new job opportunity. Being a dutiful recovering alcoholic I sought out meetings and found plenty. Just one problem, my derriere was programed for an hour of sitting, California drunks typically met for ninety minutes. My butt got itchy at the sixty minute mark.

For months I begrudgingly accepted this fact–which is not acceptance at all. But then I got the opportunity to chair a Sunday night meeting. Aha, here was my opportunity to change the way things were. I plotted and planned. I was going to win over the regular attendees of that meeting and convince them of the superiority of the sixty minute format.

My grandiosity kicked in. I saw myself as the Johnny Appleseed of the hour-long meeting format. I would spread it throughout the State of California and they would greet me as an ass-saving (literally) hero.

Or not. Fortunately I spoke to my sponsor before attempting to reformat my lowly little Sunday meeting. As it turns out, I may have not had the wisdom to know what should and shouldn’t be changed but my sponsor did. It took nearly a year, but I learned to accept the way Californians ran things and started to enjoy my meetings all the more.

When I think of importance of accepting life on life’s terms and not rushing to change, I am reminded of the story of an African king. The king, as the story goes, had a constant companion, a childhood friend, who had the habit of looking at everything and remarking, “This is good!”

One day the king and his friend were out on hunting. The friend had the task of loading the guns. A mistake in preparing one of the guns was made and when the king fired it his thumb was blown off. Rather than react in horror, the friend remarked as usual, “This is good!”

The king was outraged, “No, this is not good!” and ordered his friend to jail.

Months later, the king was hunting in an unfamiliar area and was captured by cannibals. The wood was stacked, the fire started and they began to tie him to the spit. As they began to bind his hands they noticed the king was missing a thumb. Being superstitious, they never feasted on anyone who was less than whole. So the cannibals untied the king and sent him on his way.

Returning home, the king reflected on the event that had taken his thumb and felt remorse for imprisoning his friend. He immediately visited the jail to free him.

Relating to his friend all that had transpired, the king proclaimed, “You were right, it was good that my thumb was blown off. I seek your forgiveness for sending you to jail.

“What do you mean, ‘This is good’? How could putting you in jail be good?”

“If I wasn’t in jail, I would have been with you.”